John Adams speaks about the seven parts of the housing issues facing the Twin Cities and the state of Minnesota. He believes the biggest weaknesses in Minnesota's housing market are on the demand side, pointing out the number of people who can't enter the market successfully. He says our greatest liability today is smugness about the nature of housing problems for these people and others and notes the ongoing challenge of what to do about people who are unable to achieve enough earning power to pay for housing and other needs.

University of Minnesota Emeritus Professor John Adams lays out seven parts to the housing issues and questions facing the Twin Cities and the state of Minnesota: (1) the supply side; (2) the demand side; (3) housing submarkets in the Twin Cities area; (4) government agencies trying to help; (5) organizations promoting and/or creating varying housing options; (6) institutional frameworks within which the housing process operates in the metro area and in Greater Minnesota; and (7) subsidies that-since World War II-have promoted low-density housing development in suburban areas.

Adams says the biggest weaknesses in the housing market are on the demand side, pointing out that there are a number of people who can't enter the market successfully. Many of them move from place to place and move their kids to a number of different schools within one school year. He says these are people who can't deal successfully with life in a big city.

Adams says our greatest liability today is smugness about the nature of housing problems for these people and others, with a tendency to blame the victims. There is an ongoing challenge, he says, of what to do about people who are unable to achieve enough earning power to pay for housing and other needs. He points to the students graduating from Minneapolis high schools unable to read, leaving them unlikely to ever achieve the earning power they need.

On the supply side, Adams says an outstanding strength here is the first-class housing inventory in the Twin Cities area compared with some metro areas in other parts of the country. Another strength is that Minneapolis has built public-housing towers around the city for the elderly.

John S. Adams is an emeritus faculty member at the University of Minnesota, both in the Humphrey School of Public Affairs and the geography department. He researches issues relating to North American cities, urban housing markets and housing policy, and regional economic development in the United States and the former Soviet Union. He has been a National Science Foundation Research Fellow at the Institute of Urban and Regional Development, University of California at Berkeley, and economic geographer in residence at the Bank of America world headquarters in San Francisco.

Adams was senior Fulbright Lecturer at the Institute for Raumordnung at the Economic University in Vienna and served on the geography faculty of Moscow State University. He has taught at Pennsylvania State University, the University of Wisconsin and the U.S. Military Academy at West Point. His most recent book, Minneapolis-St. Paul: People, Place and Public Life , looks at the region's growth and at what factors may affect the metropolitan area's future.

Adams holds a doctorate in urban geography from the University of Minnesota and two degrees in economics.

The Civic Caucus is undertaking a new focus on the issue of affordable housing in Minnesota. The Civic Caucus interviewed John Adams to get an overview of housing issues facing the Twin Cities and the state of Minnesota. The Civic Caucus has interviewed Adams earlier three times: May 5, 2017, "Minnesota can and must improve higher education" ; January 30, 2015, "Higher education institutions could strengthen state's human capital by refocusing on their missions" ; and August 16, 2013, "Healthiest metro economies employ creativity, entrepreneurship, hard work."

University of Minnesota Emeritus Professor John Adams divided his overview of housing issues and questions facing the Twin Cities and the state of Minnesota into seven parts:

6. Institutional frameworks within which the housing process operates in the metro area and in Greater Minnesota. 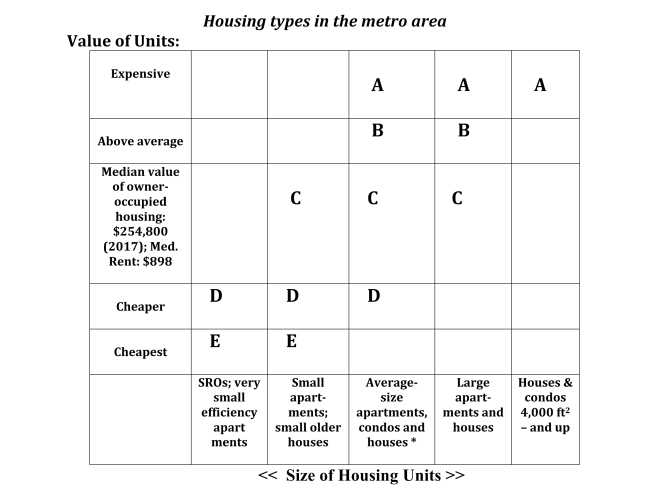 In a typical year, the housing supply is augmented by new construction. Adams said the new housing is usually focused on the expensive, large side, because that's what's most profitable for the construction and development industry.

These developer/builders must decide what to build, how to build, where to build, and what size and kind of units to build.

Adams said the fact that the larger the housing unit built, the cheaper the interior per-square-foot cost, motivates developers to build big units. "They're in business to make money," he said. "They make more money if they build big units in places people want to live." He said it's very expensive per square foot of living space to build small, cheap housing.

He said developers tend to repeat their successes and noted that state and federal tax law and the federal Department of Housing and Urban Development (HUD) affect what developers do on the ground.

He noted that every year, units are removed and units are added. In adding to the housing inventory, Adams said developers/builders face the following decisions: 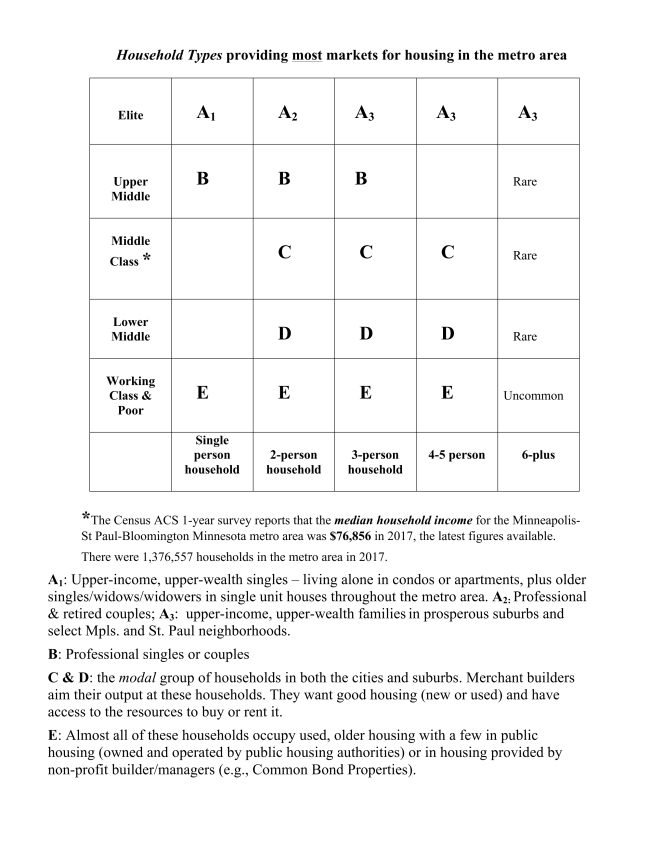 Housing submarkets affect where people move. Adams recalled talking to a developer who, in 1973 or 1974, had built a project of 300 single-family housing units in Burnsville. The developer held open houses and sold all the homes before they were done being built.

The same developer then bought another parcel of land, this time in Coon Rapids. But this time, the company had to discount the price of the same type of houses it had built in Burnsville in order to get rid of them, Adams said. "Why?" he asked.

He said the University of Minnesota did a research project in which researchers talked to people in new housing and asked where they used to live and then went to that address and asked the people there where they used to live and so on. The study helped identify 14 historic Twin Cities geographic submarkets. A map of the submarkets showed a strong movement from central and south Minneapolis to the southern suburbs, including Burnsville. But the movement from central and north Minneapolis to the far northern suburbs, including Coon Rapids, was much weaker.

Adams said these identified vacancy chains were set in motion mainly by merchant builders in the suburbs from 1946 into the 1980s. The new homes in the suburbs attracted city dwellers, creating vacancies in the central city and inner suburbs, which then became very soft markets. He said that made it possible, for example, for low-income households to move into the Phillips neighborhood in near-south Minneapolis. In the same way, he said, new housing in Robbinsdale, Golden Valley and Crystal created vacancies in near-north Minneapolis for low-income households.

"People want to live by people like themselves," Adams said.

There are a number of government agencies trying to provide housing for low-income households. Adams said they include:

6. Institutional frameworks within which the housing process operates in the metro area and in Greater Minnesota.

Adams said these frameworks include the following:

7. Subsidies that, since WWII, have promoted low-density housing development in suburban areas.

The history of the federal government's involvement in housing goes back to the depression years. It was then, Adams said, that the federal government made provisions for housing for people in need by building public housing. He said in the 1960s or 1970s the New York Times reported that in New York City, it cost more to build and operate a public housing unit that it would have to buy a house in Queens and give it to a low-income household.

Then the federal government began providing money for multi-unit housing through interest subsidies, Adams said. Section 8 was added to the federal Housing Act in 1974 in order to help low-income tenants reduce the percentage of their earnings they spent on housing. He noted that the housing vouchers provided through Section 8 enhance low-income renters' purchasing power. The federal government has a limited number of these vouchers.

Every household makes decisions on how to allocate its resources. Adams said people decide where to live, how much to spend on transportation and how much to spend on everything else. He noted that some people don't know how to manage their money. And, he said, there is an ongoing challenge of what to do about people who are unable to achieve enough earning power to pay for housing and other needs.

"We're spending over $20,000 per student each year in the Minneapolis schools," Adams said. "But we graduate kids who can't read and they likely won't have enough money for housing and other needs.

An outstanding strength here is the first-class housing inventory in the Twin Cities area. In comparison, Adams said, the housing stock looks "pretty bad" in some metro areas in other parts of country. "This metro area has been pretty prosperous for so long," he said. "We didn't have big problems here and didn't have large immigration after the 1920s. We didn't have a history of newcomers here; they stopped somewhere else. It gave the area a sense of comfort and homogeneity. There were shades of differences between political parties, but not the polarized differences we see today."

Another strength, he said, is that Minneapolis has built public-housing towers around the city for the elderly.

Our greatest liability today is smugness about the nature of these problems. Adams said there is a tendency to blame the victim and say, "You create your own life and why is that my problem?"

He said the biggest weaknesses in the housing market are on the demand side. "There are a number of folks who can't enter the market successfully," he said. "They move from place to place and their kids are in a number of different schools during one school year. These are people who can't deal successfully with life in a big city. The housing situation is a symptom of a deeper malaise-not just in the central city, but also with kids from Edina. They've got problems, too, including smugness and unrealistic goals."

Following are two tables with housing characteristics and income data about Minnesota, Minneapolis and Saint Paul, the seven-county metro area suburbs and Greater Minnesota (or non-metro, as it's referred to in the tables). Civic Caucus Interview Group member Paul Gilje compiled the tables, using the 2017 U.S. Census American Community Survey. 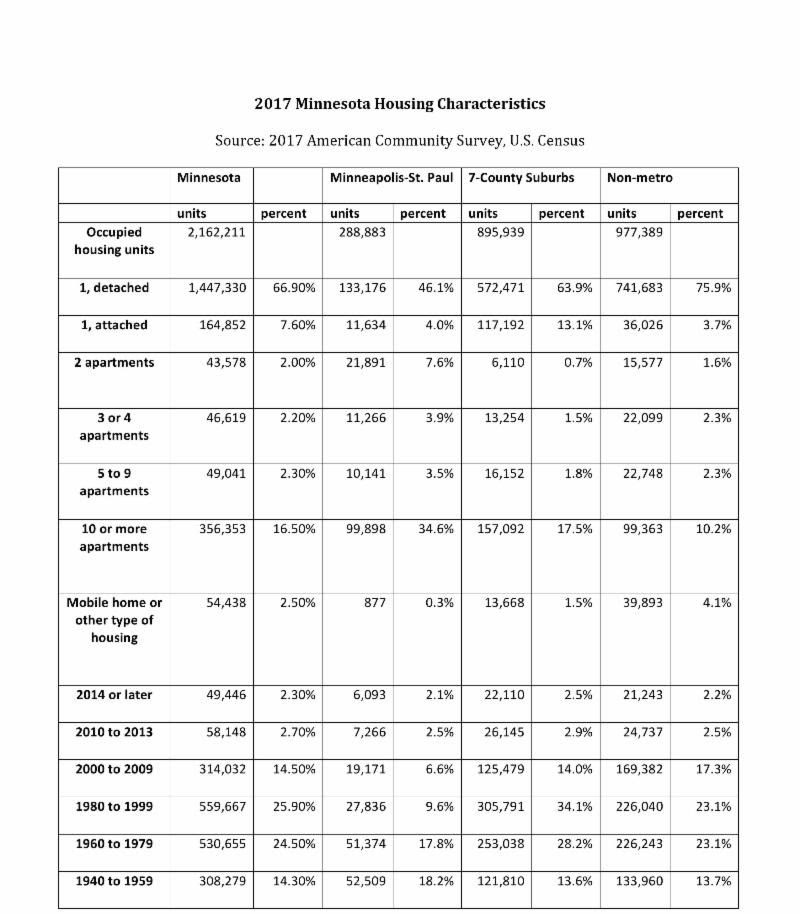 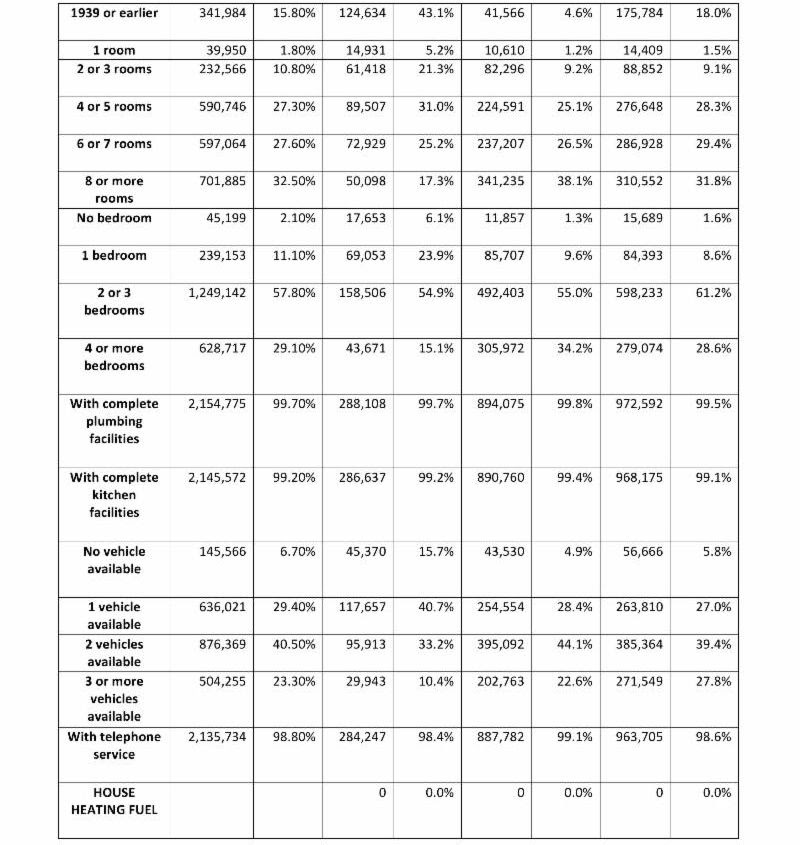 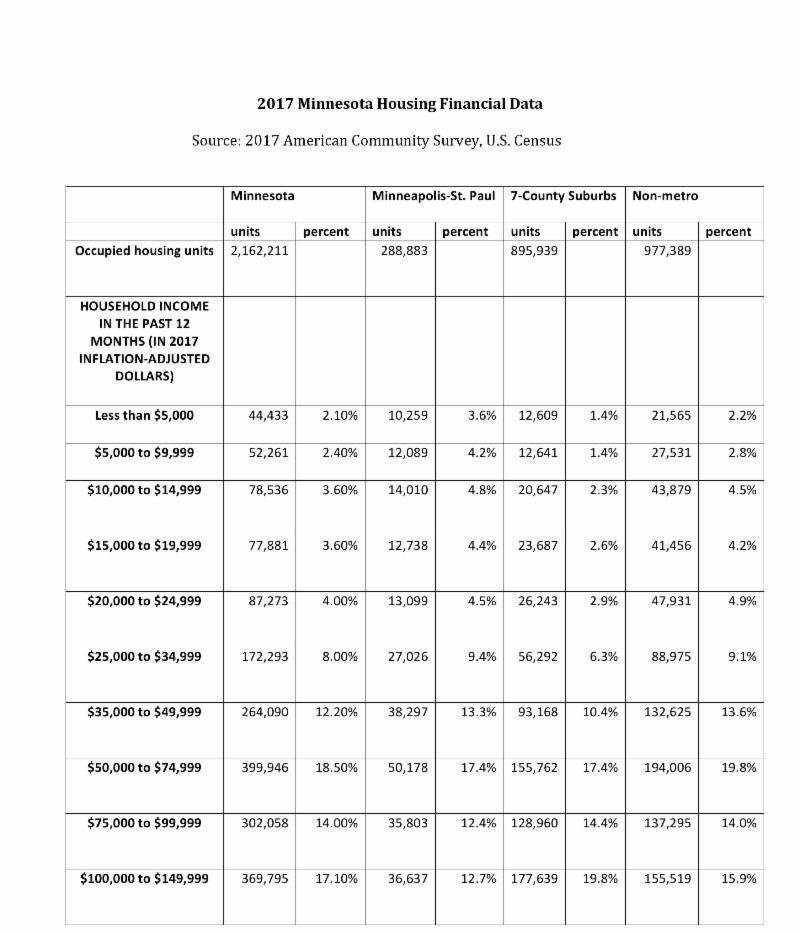 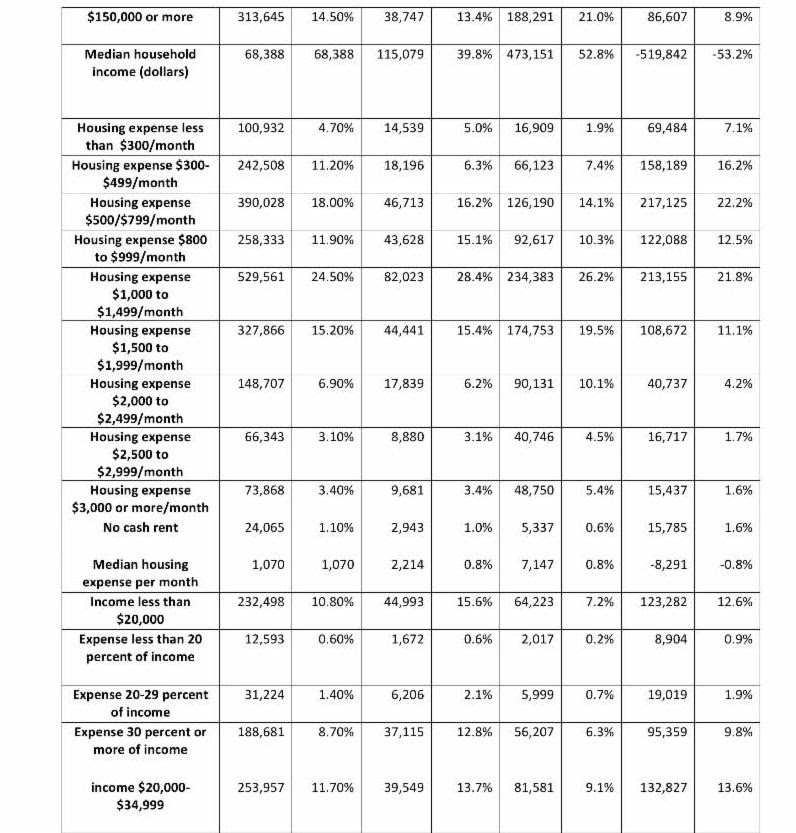 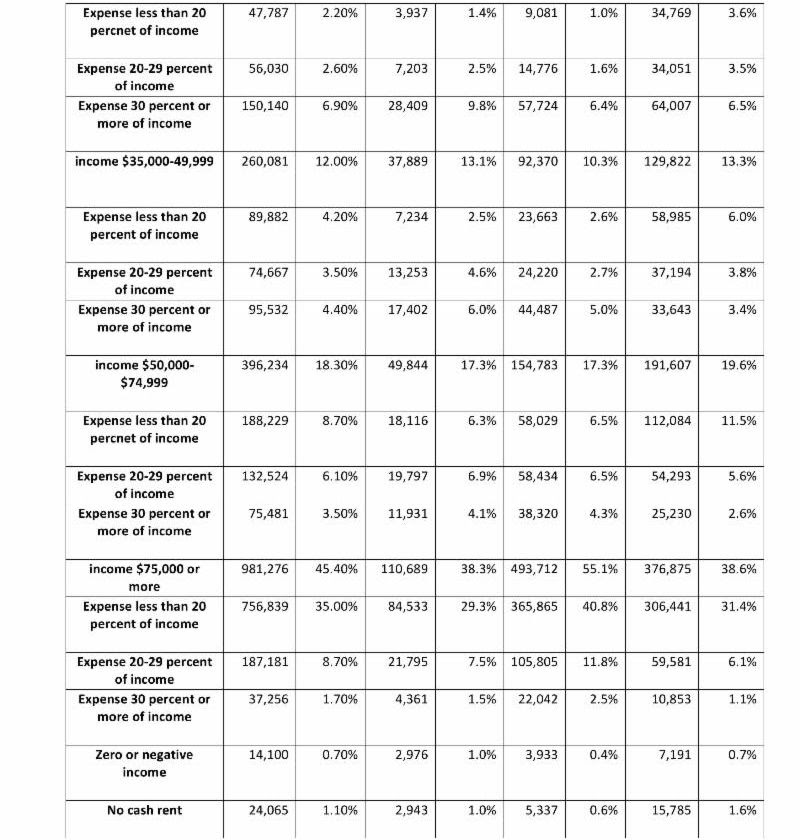